Danii had Breast Implants in Thailand

I was the one standing behind the door when tits were given out, just like my mother and my grandmother. I am one of five girls, two older with ample boobs and two younger, yet to develop their assets. When I was young I was quite chubby and as the puppy fat disappeared, so did the illusion that I had any budding breasts to speak of. I mean I was a very empty “A” cup, literally nothing, to put in a bra at all. I always wore a padded bra, a 10D, to give the illusion that I had ample breasts. My lack of this female attribute was something I hated about myself. I could not look in a mirror at my figure, as all I saw was a flat chested person looking back at me. I had no confidence and no boyfriend. I can laugh about it now as I am sporting the best set of boobs ever, but in the days prior to having my breast augmentation, it was a constant source of anxiety for me. I didn’t feel like a woman at all. My sisters obviously got my share, and my mother had remedied her situation by having breast augmentation in Australia about eight years ago.

I began university doing accountancy and the odd babysitting slash nanny job for some money. The fact that my older siblings have children and there is a big age gap difference of eighteen years to my younger sisters, I was very comfortable around kids and loved looking after them. Eventually I ditched the accountancy course as I felt that I was more suited to being a full time nanny, so it was almost by accident that I switched career paths. I have now landed a dream job working for a high profile couple in Melbourne looking after their three-year-old and four month old baby.

I am quite driven and have heaps of determination. My dream of owning my own home was number one on my to do list. And yes, of course having breasts, was number two. Once I had saved enough money to get into my house, which I share with a very close girlfriend, the balance of my hard earned savings was earmarked for a boob job. I am 25 years old, I had never been overseas and I didn’t even have a passport. Whilst my friends were gallivanting overseas for exotic holidays, I had my head down saving all the money I could. I worked on the premise that I could always go traveling later.

My decision to have surgery done in Thailand was entirely a cost driven one. In Australia I would have been looking at spending about $12,000, whilst I could get it done in Thailand for almost a third of that amount. By the time I paid for a girlfriend to come with me as my carer, I paid a total of $5,500, which included $3,500 (THB 99,000) for the surgery and the balance for flights and accommodation. I had heaps of leave owing to me from my previous job, so time was not an issue, as I was in between employment when I had it done. 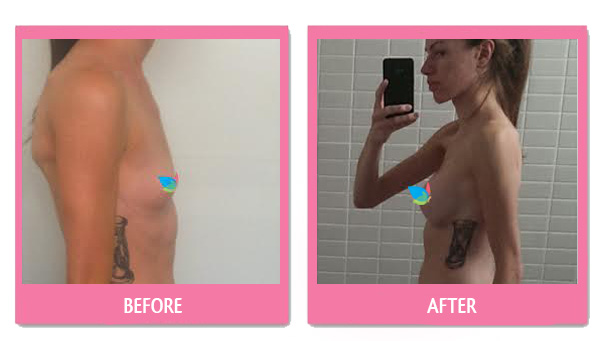 The funny thing was, when I eventually met Suellen and found out that she was an Australian, I was gob smacked. If I had known this from the beginning, I think it would have allayed any little twinges of doubt that I had had. I must say I was a little bit iffy about having surgery done in Thailand but the price was right for my budget. My mother was horrified that I was having my breast augmentation done in Thailand, but thank goodness for my sisters, as they were all for it. Mum even stood at the airport crying when I left, as she was concerned that if anything went wrong, she would not be there for me. You might have gathered, I am extremely close to my mother and my sisters. I had to quickly apply for a passport and pay extra for it to be express processed. Maybe it was the fact that it was all organized so quickly, that I did not have time to really consider what could go wrong. I am naturally a positive person, so I took my sisters’ advice and just went for it.

Independent me, I wanted to fly Royal Brunei Airlines, so I arranged the flights for my girlfriend and myself. Four days prior to our scheduled departure, the airline changed its schedule and had us landing in Bangkok “after” the time arranged for my surgery. In a panic, I emailed Suellen and she immediately rescheduled all the arrangements that had been made, to fit in with our new arrival time. I cannot thank Suellen of Destination Beauty enough, as she went out of her way to sort everything out for me.

In 24 hours I went from having nothing to the most beautiful pair of boobs I could have ever wanted. I went into hospital on a Monday at 1pm and came out the next day at 1pm. Upon my arrival I showed Dr. Kasemsak the padded bra that I always wore, to give him an indication of the size of breasts I wanted, and it was exactly what I got.

The hospital,  Destination Beauty, was a five star hotel complete with complimentary toiletry bag, which I still use. It was spotlessly clean and the nurses were amazing as they helped me with things like showering. I know I have a high tolerance for pain, and I only needed painkillers when I awoke that first night and my breasts felt heavy and uncomfortable. When I first woke up from the operation I was numb, but eventually the pain kicked in and I could not get back to sleep so I succumbed to taking some medication. I had an extremely comfortable private room complete with ensuite. There was also a fold out bed for a carer, but alas my carer was nowhere in sight. She had opted for staying at the hotel that night and running amuck in Bangkok!

It is such a small world. When the driver delivered me to the hotel, Destination Beauty Luxury Apartments the day after my operation, I ran straight into the work boss of one of my sisters. She had also had surgery done by Destination Beauty and was staying at the hotel recovering. She had opted to join a tour group from Australia, so with this connection I met plenty of people also recovering. Every morning it was a bit like a social gathering over breakfast with everyone discussing how their healing progress was going. Actually it was great because they were all ahead of me by a few days and could tell me what to expect day by day. I often thought it would be funny to be a fly on the wall at the other breakfast tables of the hotel guests who may have been listening to our blow-by-blow descriptions of surgeries, amidst much laughter on our part.

I had ten days in Bangkok of which 24 hours was spent in hospital. It was only 36 hours after the operation that my girlfriend and I ventured out for dinner and I was in no real discomfort. I had bought a surgical bra before I left Australia, as I was warned not to wear any underwire bras during the recovery time. I was also told that it would take probably 3-4 months for the nerves and tissue to heal completely. Despite the fact that my so called “carer” did not stay in the hospital with me and more or less just had a holiday at my expense, I did recover more quickly having her around just to get me up and going. We did do a bit of retail therapy, but not a lot.

Because I didn’t tell anyone that I was having surgery in Thailand except for my family and three closest girlfriends, and the fact that I had always worn a padded bra to hide the fact that I had nothing in the breast department, it was amazing when I wore a low cut top to work one day with no bra. My co-workers couldn’t believe how great my boobs were and actually wanted to touch them.

My experience with Destination Beauty was fantastic. Nothing was too much trouble and nothing was left to chance. From the hospital and Dr. Kasemsak, to the hotel, everything was taken care of in a professional and caring manner. And of course, my new breasts are simply a dream come true.

Next Steps Towards a Breast Augmentation, How Much Does It Cost?